As a Maryland Mom, I often travel across the Potomac River to head into Virginia for cool places to visit (and great shopping!). One thing we definitely go down to Virginia for are LEGOS. Do you have a Lego fan in your home? We have two. B&J love Legos and have been building with them for years. Legos are the “toys” with the longest staying and playing power in our home. 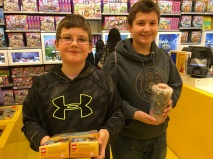 One obvious place we visit is the Lego Store in Tyson’s Corner. There are Lego stores located in Maryland (both Westfield Annapolis and Arundel Mills have Lego stores), but we just tend to like to go to the Tyson’s Lego store (perhaps, I enjoy shopping at Tyson’s as well and always make a stop at The Container Store while down there:-)).

If you haven’t been to a Lego store, definitely plan a trip! They have almost all of the current Lego sets that Lego offers at that time. Plus, kids can make custom Mini Figures and fill a small container of random Lego bricks at the Lego wall. My oldest is big into building WWII Battle scenes (more below). Last year, he needed lots of Lego grass pieces for his Brick Fair WWII scene. He filled up a small container at the Brick wall and was quite happy. 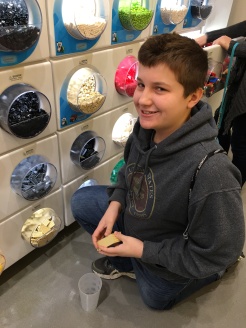 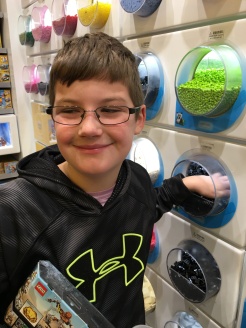 Another Fun Virginia Lego Event is Scouting for Bricks. What Scouts and Legos together?!? This is what I said last year when my friend told me about Scouting for Bricks. We are HUGE scouters in our family so any chance to support the Scout Program is awesome for us. But, a Scouting event centered around Legos is just too cool! Boy Scout Troop 39 hosts this awesome event each year in Leesburg, VA. It’s their Troop’s annual fundraiser. Admission is $5.00 per person which truly is a great way to support Scouting. The event has Lego games, Lego displays, and Lego Vendors. They have fun places to take Lego selfies as well. Last year, the toss for Legos game was a huge hit with my guys. If you threw a ping pong ball into a goldfish bowl, you won the Legos that were in that bowl. J won twice and was SO excited. This year’s event will be at Heritage High School in Leesburg from 11:00 a.m. to 5:00 p.m. on Saturday, May 14 and Sunday, May 15, 2016.

Our absolute favorite summer event is Brick Fair. We’ve been going for years. It’s put on my AFOL’s (adult fans of Legos). It’s HUGE! It’s held each year (usually the first weekend of August) in Chantilly, Virginia at the Dulles Expo Center. This event is HUGE! There are every imaginable possible brick creation. Things you wouldn’t even think of made out of Legos. Huge castles. Battle Scenes. Huge Lego Cities. Lego Railroads. Every year is different and I’m just truly amazed at the creativity each year. Plan to spend at least 2 hours exploring all of the displays. Make sure you bring a camera as well. Plan to play bingo too (the prizes are great—Legos of course!).

Last year, I took the plunge and signed-up the boys to be exhibitors. B has been especially asking for years. I figured it would be fun and we would gain a VIP pass for the event. Wow, was I amazed! Exhibitors can start setting up three days before the public days. We were in for some serious Lego fun. The boys truly were in their element surrounded by like-minded builders. We met nice folks from across the country and even nice folks from other countries. The boys had so much fun chatting with other kids, teens and adults who love Legos. They shared Lego tips, traded Legos and checked out each other’s creations.

The people who put BrickFair on even plan talks about Legos, raffles and games. We even got to see a sneak preview of the Lego Brickumentary movie (highly recommend this documentary). The boys also met some of the important Lego people–the man behind the “Brick Journal” magazine and a Rep from the Lego Company. But most important, they made friends their own ages who like to build with Legos. My oldest tends to have a tough time finding teens his age who take his hobby seriously. So, this was extra special for him. He has kept in touch with the friends he made last summer at Brick Fair and plans to work with them on a creation this year. This is quite commom—I chatted with a super polite older teen who traveled by himself to Brick Fair to spend the five days with his Brick Fair friends. Truly, each year these builders look forward to spending time with their Lego friends and fellow builders.

Even if you don’t think you’re up for exhibiting this year, plan to come as a visitor. You won’t be disappointed! Whether you spend two hours, five hours, 2 days or 5 days, Brick Fair has something for everyone.

This year, the public days of Brick Fair are August 6-7, 2016. Plan to arrive early and if you can, pre-buy your tickets. The line starts about an hour before the event and has been known to wrap all the way around the building (been there, done that!). It’s worth the wait. But do bring water if it’s a hot day as there’s minimum shade. Bring your camera and some spending money too. Just like Scouting for Bricks, the creations and the vendors are awesome. It’s a great place to pick up a rare mini figure, rare set, unique Lego piece and of course a cool Lego t-shirt (see above). One vendor last year even sold Lego neckties and hair barrettes. The event will again be at the Dulles Expo Center.

As a Mom, I found not only was it awesome to witness my sons having a great time at Brick Fair but it was also fun to see other children marveling at their creations. Seeing little guys oohhh and ahhhh at the creations was so cool. Especially because I know they will do the same thing my guys do after a Lego event—they go home and build amazing creations with their Lego collections!! 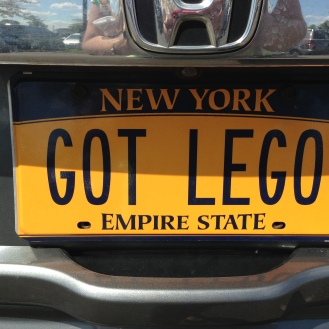 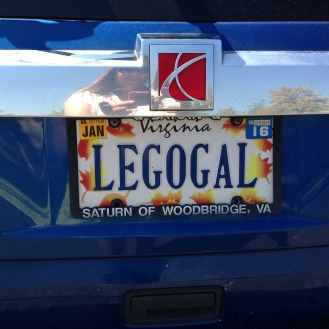 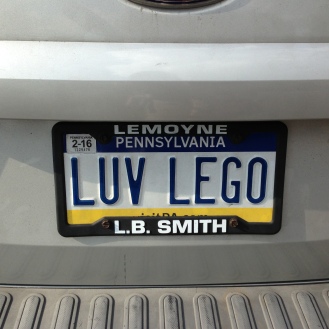 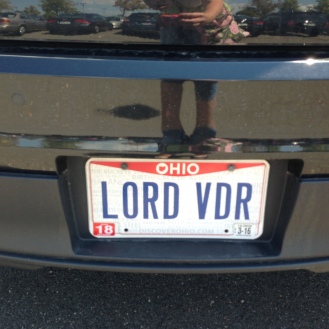 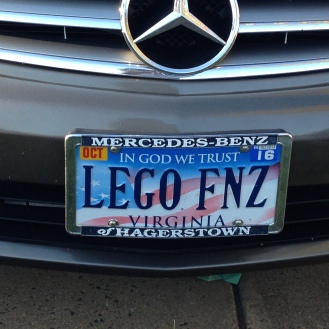 On a side note, I entertained myself as we unloaded (and unloaded!) Legos out of the minivan by taking photos of all the cool license plates in the parking lot at Brick Fair. I’ve always loved license plates but thought these were extra unique.

My name tag this year will say “Lego Mom.”  {Chuckles!}

Please leave a comment if you have a tip on how I can avoid stepping on Legos?!?! That hurts!!