Several years ago, on Labor Day weekend, we took the boys to Fort McHenry National Monument and Historic Shrine. I’m embarrassed to admit that I’ve lived in the state of Maryland my entire life and hadn’t visited this gem of a historic site until this day. I’m going to blame it on maybe being sick the day of this school field trip?!?

Fort McHenry was the site of the Battle of Baltimore on September 13-14, 1814. The defense of the Fort inspired Francis Scott Key to write the “Star-Spangled Banner,” our National Anthem. My boys LOVE history and we just thought it was high time our family visited this historic site.  We were not disappointed.

A couple notes….as I’m not a huge fan of driving in a large city (still love going to Baltimore), the directions on the park’s website were great. It was fairly easy to get to the Fort, without many turns off of the highway (the Ranger gave us quick and easy directions to return to the highway when it was time to leave).

I would also recommend arriving early. The parking lot is quite small and you’ll want to get a parking spot. You can also take a Baltimore Water Taxi from other spots on the Harbor. The Water Taxi site posted that the Water Taxi stops at Fort McHenry only from April 30-Sept.30th–check before you go!. The Water Taxi stop is a few steps from the Visitor Center and Fort. Last but not least, if you go on a hot day (which we did!), bring lots of water. Most of the paths are un-shaded. You’ll want to stay hydrated so you can enjoy the Fort.

We arrived early enough to enjoy one of the wonderful Ranger Talks. Our family are HUGE fans of our Nation’s National Parks. We have always been amazed with the information we gain at a Ranger Talk. The Rangers are always friendly, full of information and are very patient with children. The Ranger Talk that we participated in was about the Battle of Baltimore and our American Flag. It was a hands-on talk where we got to help unroll a huge American Flag. Personally, I thought this was super cool. The pictures were amazing and the boys learned a lot. 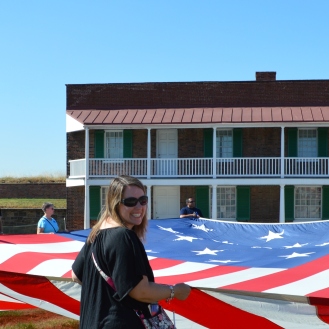 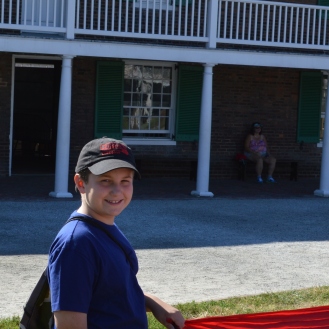 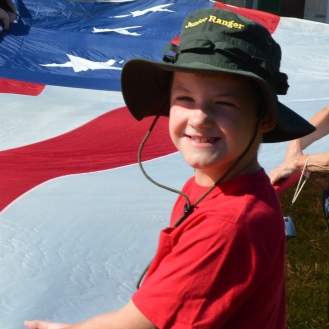 After the Ranger Talk, we walked around the buildings of the Fort. It’s interesting to imagine what life was like for the soldiers and folks who lived and worked at the Fort. The barracks and jail interested the boys…as did the gun powder room! 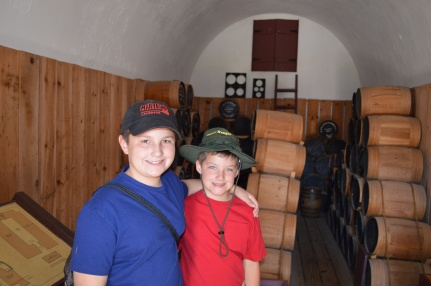 Both had to be “locked” in the jail!!

After exploring the Fort, we walked around outside to explore the grounds of the Fort. There are of course cannons and some cool hiding spots to see. The boys couldn’t help but image the cool Nerf Gun battle that could be had there!! Most likely not allowed but they are boys! The views of the Baltimore Harbor are amazing from the Fort as well. It’s a nice place to walk and get some exercise. 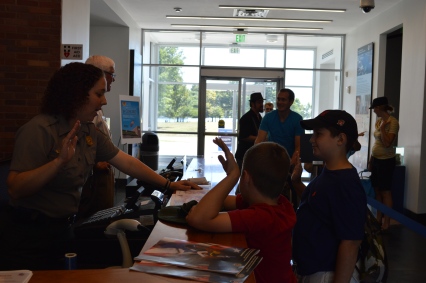 Before we left, the boys showed the Rangers their completed Junior Ranger workbooks and were sworn in as Junior Rangers of Fort McHenry National Monument and Historic Shrine!

What a perfect day in Maryland!

(on the way home, it’s nice to sing the Star Spangled Banner, our National Anthem. Link here for the words. Thank you Francis Scott Key for writing this amazing song!).